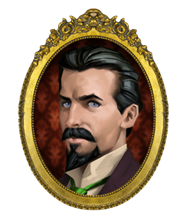 Pearl’s father Samuel had the reputation of a ruthless financier who’s secrets were far from golden. When Edwin was presumed dead in a plane crash, Samuel moved the whole family to Artemis Island in Polynesia. After the death of his wife Dorothy, Samuel then sent Pearl to a reputable boarding school back in New York City.

Distant and sullen, his relationship with Pearl was often strained, yet over time it appears there may have been understandable reasons for his behavior. Was he trying to protect the family? To protect Pearl? Samuel and the true meaning of his death lie at the heart of Pearl’s adventures.

Community content is available under CC-BY-SA unless otherwise noted.
Advertisement