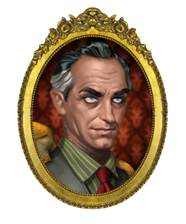 Pearl's grandfather, Edwin Wallace, is the head of the wealthy Wallace family, who made his reputation in society as a respected architect. He bought Artemis Island in Polynesia, to turn into a personal playground for his designs - or so he said. In truth, Artemis Island serves as a base for the secret society of art and science known as the Golden Mean.

Edwin found necessary to fake his own death several years ago, but has now returned to the island and to Pearl’s life. Edwin's pale blue eyes and penetrating gaze indicate a steely determination and a man who can play many roles.

Community content is available under CC-BY-SA unless otherwise noted.
Advertisement